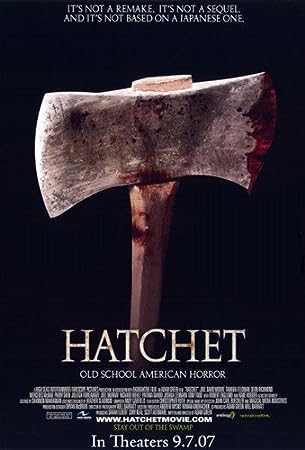 Or Quadrilogy, I should say.

My usual F13 plans involve, well, watching a Jason Voorhees flick, because, of course.  But that’s not why you’re here.  You’re here because you’ve seen all the popular slashers and it’s the middle of October, and you want MORE. Don’t worry, I’m here.

So while I would usually be watching a Voorhees flick, I am actually currently attending the Toronto After Dark Film Festival.  Tonight is slasher night and while there is no Voorhees, we will get to see Kane Hodder  (who’s often adorned that iconic hockey mask as Jason) on the big screen as Victor Crowley in the fourth installment of the series.  Hatchet is often skimmed over by slasher fans, so I am here to share it with you, dear readers.

The entire trilogy reads like one long movie as each picks up exactly where the last left off.  After the mysterious and tragic death of a boy in a swamp in Louisiana, legends spring up about a father accidentally killing his son, a deformed cursed boy, and a fire set by mean spirited boys.  Victor Crowley, the cursed deformed boy, terrorizes anyone who comes to the swamp after dark.  After her family falls victim to Crowley, Mary Beth sets off on a mission to rescue her father and brothers and rid the swamp of the curse of Victor Crowley.

This series is great junk food when you’re looking for a new slasher, and, who isn’t.  I won’t lie to you, the third installment is by a landslide, my favourite, so I recommend committing to this trilogy.  It’s absolutely obscene and has no excuse for some of its missteps, but you will certainly be entertained.  Settle into this while I screen part 4 for you tonight at #tadff.  I’ll let you know how it is.

Great if you liked: A Nightmare on Elm Street, NOES, Friday the 13th, Jason Goes to Hell, Jason Lives, The Final Friday, Scream, The Town That Dreaded Sundown, I Know what you did Last Summer, Halloween, The Texas Chainsaw Massacre, My Bloody Valentine, Maniac